After inaugurating the exhibition at Pragati Maidan here, he went around pavilions set up by different telecom operators and technology providers to get a first-hand experience of what 5G can do.

Mukesh Ambani says Reliance Jio’s 5G services will be available pan India by December 2023. “India may have started late, but will finish first…will have the best quality and most affordable 5G services.”

The cumulative economic impact of 5G on India is estimated to reach $450 billion by 2035.

This technology should be used to bring about a revolution: PM Modi

Now that it has launched, it won’t take time for it to reach everyone, PM Modi said at the launch of 5G services in India.

“This technology shouldn’t be limited to just voice calls or watching videos. This should be used to bring about a revolution,” he said adding that in the near future the country will work on technologies that will make India a global leader

This is not just India’s decade, it is the century of India: PM Modi

India is among those nations where data is so affordable. Earlier 1 gb data used to cost ₹300, now it only costs ₹10, PM Modi said highlighting the low cost of data services in India

Today an Indian, on an average spends 14 gb data in a month. In 2014 this cost ₹4,200 per month, now it is costing somewhere between ₹125 to ₹150. This means that poor and middle-income people are saving approximately ₹4,000 every month, it is not a small feat, he added.

“This is not just India’s decade, it is the century of India,” Mr. Modi said adding that this an occassion for the entrepreneurs, small artisans and businessmen to help them progress further.

There was a time when a section of the elite class…you can watch speeches from the Parliament as well, our politicians made fun of and thought that poor people do not have the capacity to understand digital services, PM Modi said.

They were under the impression that poor people will not even undertand the meaning of the word ‘digital’, but I have always had confidence in the common man, he added.

“Today whether its small businessmen or local artisans, Digital India has provided everyone with a platform,” the Prime Minister said.

Our government is working on the goal of internet for all: PM Modi

We focused on four pillars, which inlcude the cost of device, digital connectivity, cost of data and the mindset of Digital First., Prime Minister Narendra Modi said of the 5G launch in the country

“When we talk about the cost of device, it can only be affordable when we are Atmanirbhar,” Mr. Modi said.

It is to be noted that today, compared to the internet users in urban areas, the number of internet users is increasing rapidly in rural areas, he said adding that now there are been an increase in the reach of optical fibre.

“Our government is working on the goal of internet for all,” he says.

Stating that the government provided policy support for 4G, Mr. Modi adds that this resulted in reduction of cost of data and ushered in a data revolution.

Today 130 crore Indians are getting the gift of 5G: PM Modi

“Though this summit is global, the voice is local,” Prime Minister Narendra Modi said at the 6th India Mobile Congress where he launched 5G services.

“Today 130 crore Indians are getting the gift of 5G,” Mr. Modi said adding that 5G is ushering in a new era.

“I am happy that school children from rural parts of India are part of this rollout,” the Prime Minister said. “I have felt how new technologies are changing the meaning of education for these students. Students are interacting with eminent scientists from their classroom, it is an exciting experience.”

The new India will not only be a consumer of technology, rather India will play an active role in the development and implementation of the technology, he said. PM Modi interacting with a hologram of a student. Photo: Screengrab from YouTube/PMOIndia

Continuing with different use cases of 5G technolohy, Prime Minister Narendra Modi interacted with the hologram of a student at Pragati Maidan. “The most important thing is the trust of the workers, they should feel safe,” Mr. Modi said.

“Tell me, without the teacher physically present in front of you, do you think you can effectively study like this?,” he asked students during an interaction.

“Maybe we will have to tell these technology operators to keep an eye on the students,” Mr. Modi said in a lighter vein. “It is on the back of your vision and leadership that we will witness a generational leap in technology,” says Kumar Mangalam Birla at the launch of 5G services, thanking the Prime Minister for acknowledging the role of telecom industry during the pandemic.

“As we move into the 5G era, we hope to receive continued policy support to drive the 5G revolution in this digital decade,” he adds.

‘Fortunate to have a leader who understands technology’: Sunil Bharti Mittal

“This will open up many new opprtunities for our citizens,” says Sunil Bharti Mittal at the launch of 5G services.

Speaking at the IMC 2022, he said the nation’s oldest private telecom operator is launching 5G mobile services in eight major cities and will cover most parts by March 2023 and the entire country by March 2024.

Mr. Mittal says that we are fortunate to have a leader who undertands technology. “Technology is appreciated by many leaders, but to minutely understand it and to make use it for the progress of the country, only Modiji has done that,” says Mr. Mittal.

“Without the vision of Digital India, during this pandemic, we would have had a very difficult time,” Mr. Mittal adds.

‘5G is a foundational technology that unclocks the full potential of other 21st century technologies’: Mukesh Ambani at launch of 5G services

“I can wholeheartedly say today that as Indian telecom industry what we have demonstrated, I feel very proud…I can say that we are now ready to take leadership,” says Mukesh Ambani at the launch of 5G services.

“The steps taken to fasttrack India’s march into the 5G era provides a compelling proof of our Prime Minister’s determination,” says Mr. Ambani.

“5G is a foundational technology that unclocks the full potential of other 21st century technologies,” he says adding that 5G can be thought of as five goals to transform the country.

“With 5G India will take longer and faster strides towards Sabka Digital Saath and Sabka Digital Vikas. India may have started a little late, but we will finish first by rolling out 5G services across the length and breadth of India,” Mr. Ambani says adding that focus will be on quality and affordability.

He announced that his telcom firm Reliance Jio will launch 5G services across the country by December 2023.

Jio is rapidly progressing to roll out 5G services within this month.

Mr. Ambani said Jio will launch affordable 5G services and cover every nook and corner of the country by December 202

“Telecom is the gateway of Digital India. It is the medium to provide digital services to India. PM Modi gave the telecom sector, the status of a ‘strategic status’,” Union Minister for Communications Ashwini Vaishnaw says at the launch of 5G services.

“He focused on the development of the sector, gave it regulatory certainity…all of this has resulted into the sector emerging as a sunrise industry,” he says.

“Due to Narendra Modi’s vision we have made 4G, 5G and within this decade will also make 6G,” says Minister of State for Communications Devusinh Jesingbhai Chauhan, addressing the audience at Pragati Maidan on the launch of 5G services.

After inaugurating the exhibition at Pragati Maidan here, he went around pavilions set up by different telecom operators and technology providers to get a first-hand experience of what 5G can do.

He started with Reliance Jio’s stalls, where he witnessed the ‘True 5G’ devices displayed and experienced the use case through Jio Glass.

He thereafter visited stalls of Airtel, Vodafone Idea, C-DOT and others.- PTI 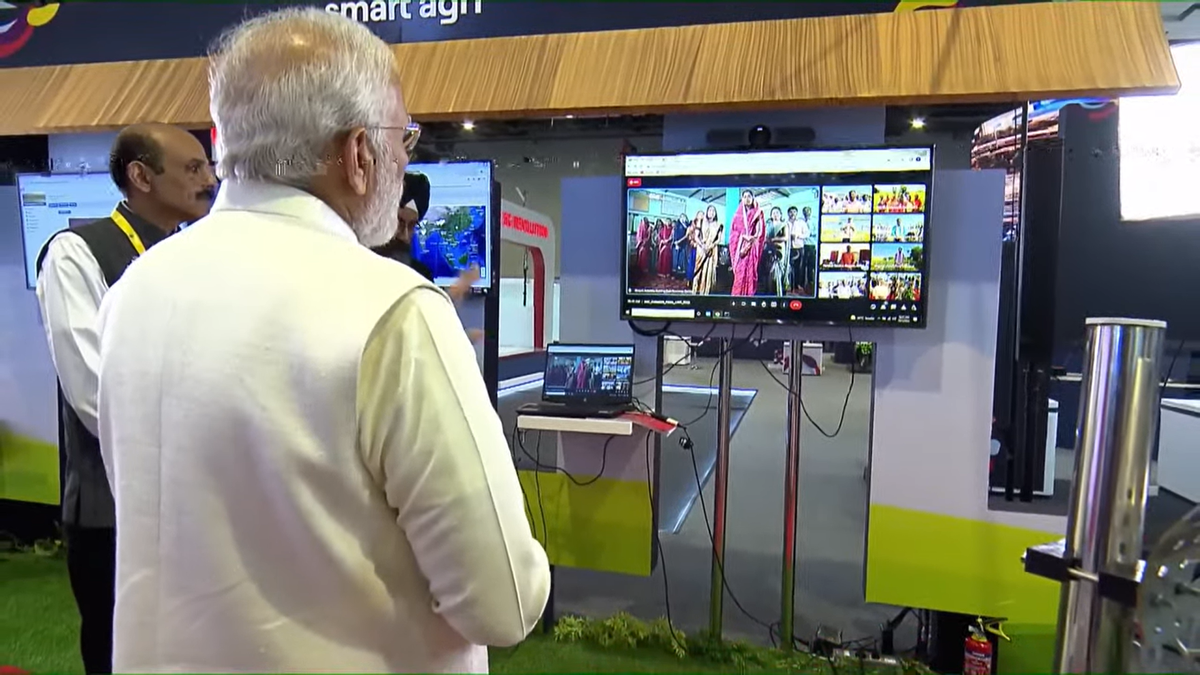 PM Modi receives a demonstration of 5G usage for video communication at Pragati Maidan, ahead of 5G launch in New Delhi on October 1, 2022. Photo: Screengrab from YouTube/PMOIndia

The implications of the 5G roll-out for law enforcement

The long-awaited upgrade from 4G to 5G will allow ultra-fast Internet speeds and seamless connectivity across the country compared to 4G. The implications of the 5G roll-out could be significant, particularly for law enforcement in India. PM Modi testing out usage of 5G technology for remote-use purposes at Pragati Maidan, ahead of 5G launch in New Delhi on October 1, 2022. Photo: Screengrab from YouTube/PMOIndia PM Modi along with Minister of Communications Ashwini Vaishnaw interacts with service provider representatives at Pragati Maidan, ahead of 5G launch in New Delhi on October 1, 2022. Photo: Screengrab from YouTube/PMOIndia Prime Minister Narendra Modi will be showcased the working of 5G services from an underground tunnel of the Delhi Metro’s upcoming station in Dwarka Sector 25 during the launch of the high-speed mobile internet facility by him on October 1, sources said on Thursday.

“A portion of the tunnel at upcoming IICC premises has been chosen to showcase the working of the 5G network inside the tunnel to the prime minister,” a source said.

The preparation for the event was recently reviewed by the lieutenant governor in a meeting with representatives of DMRC, a private telecom company and other officials.

The 5G setup inside the tunnel includes telecom equipment, cameras, optical fibre cables. The DMRC has provided logistical support for the demonstration during the 5G roll-out.- PTI

The three major telecom operators of the country will demonstrate one use case each in front of the Prime Minister to show the potential of 5G technology in India.

Reliance Jio will connect a teacher from a school in Mumbai with students in three different locations in Maharashtra, Gujarat and Odisha. This will demonstrate how 5G will facilitate education by bringing teachers closer to students, obliviating the physical distance between them. It will demonstrate the power of Augmented Reality (AR) on screen and how that is being used to teach children across the country, remotely, without the need of an AR device.

In the Airtel demo, a girl from Uttar Pradesh will witness a lively and immersive education experience to learn about the solar system with the help of Virtual reality and Augmented reality. The girl will share her experience of learning with the Prime Minister by appearing on the dais through a hologram

According to Prime Minister’s Office (PMO), he is scheduled to launch the 5G services at 10 am at an event organised at Pragati Maidan in New Delhi

Mon Oct 3 , 2022
This story is part of Focal Point iPhone 2022, CNET’s collection of news, tips and advice around Apple’s most popular product. Apple’s iOS 16 is here, and there’s a collection of cool new features to try out. There are a few annoying features, too, but you can always disable those. […]