CLOSE As many schools start to opt for online learning, here are tips to minimize distractions at home. USA TODAY Before life went sideways in March, Jennifer Ludtke and her daughters were deeply rooted in the public schools in Las Vegas. Ludtke was a principal of a charter high school and […]

As many schools start to opt for online learning, here are tips to minimize distractions at home.

Before life went sideways in March, Jennifer Ludtke and her daughters were deeply rooted in the public schools in Las Vegas.

Ludtke was a principal of a charter high school and had worked in the Clark County School District, and her daughters took advanced classes at a district middle school.

This year, after a lot of research about COVID-19 and schooling options and after the district announced it was starting virtually, Ludtke withdrew the girls and enrolled them in a state college that offers online classes. They’re earning both college and high school credit in English and math. (Because the girls are 12 and 13, the college administrators asked to interview them first – then offered them a grant toward tuition.)

Ludtke resigned from her principal role and stepped back to teaching, which leaves her time to home-school her daughters in their other necessary subjects, such as social studies and physical education. The girls hadn’t learned much in the spring when Clark County moved to remote instruction, she said, and the combination of college classes and home-schooling seemed to be the most rigorous option.

The upshot: The girls are learning, but they’re no longer enrolled in any school district.

As parents nationwide tread through a wildly different education landscape this year, many kids, like the Ludtke sisters, disappear from the rosters of their public schools. Clark County schools are down about 10,000 students this year, a loss that will translate into a reduction of about $61 million from the state of Nevada, though the impact won’t be felt right away.

It’s a similar story in many other large districts that started the year with all children learning virtually: Dallas; Austin, Texas; Los Angeles; Nashville, Tennessee; Miami and Broward County schools in Florida all reported enrollment declines, missing large swaths of children in the youngest grades. 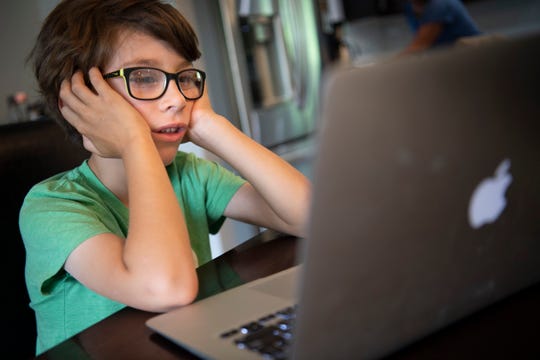 Enrollment equals money for classrooms and teachers, especially in high-poverty districts that are funded primarily through state aid. Less money means teachers get moved around, reassigned or laid off. Or it could mean fewer support services for students, or fewer specialized classes, or fewer nurses and counselors.

In short, less money means less of what students need when they’ve been away from school for months because of a pandemic. It could widen achievement gaps and leave even more children behind.

Lower-income parents with poor internet connectivity or fewer computers and tablets, or those who can’t support their very young children’s online learning, may opt out altogether. That could make it even harder to catch those children up once in-person, daily instruction resumes.

Teenagers who have chosen to work rather than return to school virtually – a trend particularly prevalent among low-income Latino families, school leaders said – could be at greater risk for dropping out altogether. 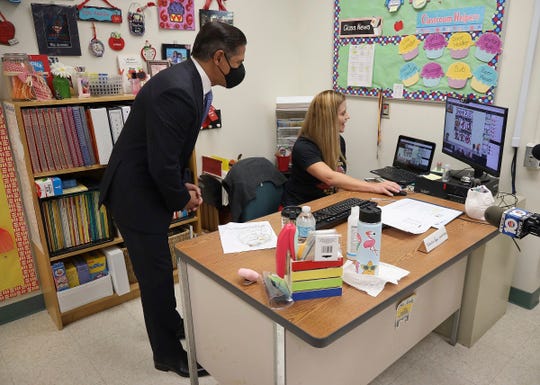 Higher-income parents have the means to explore other options, such as home-schooling, joining a learning pod with a privately hired teacher or enrolling in private school. They may stick with those new options even after the pandemic subsides – leaving some schools with less money and a higher concentration of students with the highest needs.

Two of the whitest and wealthiest neighborhoods in Clark County – Henderson and Summerlin – saw the biggest drops in enrollment this year, according to district data. In poorer neighborhoods, larger percentages of children showed up to their zoned schools for virtual learning, Ludtke said.

“We’re increasing economic segregation throughout the country,” Ludtke said. “Your cheapest kids to educate are leaving.”

‘No, thanks’ to virtual learning

About 74% of the country’s 100 largest school systems started the year with all-remote learning, according to Education Week magazine.

Many parents and teachers believed starting virtually was the safest and most efficient option. Others desperately wanted their kids back in school buildings.

And many parents of young learners resisted the idea of sitting 4- and 5-year-olds in front of a computer for long stretches. Or their work schedules didn’t allow them to monitor their young children at home every day.

When Las Vegas parent Melissa Ruiz heard Clark County would start the year with remote learning, she called private schools opening with in-person instruction to see if they had space for her 5-year-old son. Ruiz works in a physical therapy office, and she couldn’t stay home to monitor her son.

Ruiz, 29, said the price tag for tuition is steep: $1,000 per month. But her son is learning a lot, she said, and she may keep him in private school if she can afford it.

“I don’t want him to backtrack,” she said.

Some parents don’t have the technology to help their children learn from home.

A high school junior shares a glimpse of what digital learning is like during the coronavirus pandemic.

In Los Angeles – one of the first school systems this summer to announce it would start the year with remote instruction because of a surge of infections – kindergarten enrollment is down about 6,000 students, or 14%, from last year, according to the district. In previous years, LA’s kindergarten enrollment dropped by about 2,000 students each fall.

The biggest declines are generally in neighborhoods with the lowest household incomes, Superintendent Austin Beutner said.

“We suspect some of this is because families may lack the ability to provide full-time support at home for online learning, which is necessary for very young learners,” he said at the end of August.

•In Arizona, Mesa Public Schools, the state’s largest school system, started the year online with about 1,000 fewer students than last year, according to district data. In all, 106 out of 145 Arizona districts reported enrollment declines, according to a survey of schools.

In Dallas, enrollment has been declining by about 1% annually. This year, it dropped by 7%, to about 141,000 students, Superintendent Michael Hinojosa said. Schools are missing about 34% of prekindergarten students but only 2% of high school students, he said.

“If you lose 7% of your students, that’s going to have a big impact on your budget,” Hinojosa said, adding that schools could lose $30 million to $60 million from the state.

High school students are missing, too

It’s not just kindergarten students who have disappeared.

Students started dropping off in the spring semester when classes shifted online, she said. Many teens started working full time to help their families manage the financial uncertainties brought on by the pandemic.

“For many of our undocumented families, their citizen children became the breadwinners, and the burden of survival fell on their shoulders,” Gonzalez said. “We have several that decided not to return this year because they need to continue to work.”

Gonzalez said she also lost students who moved to more affordable states, moved to be with ill family members or left the country altogether.

Students who stayed faced challenges with online learning. Most attend virtually, but many do not complete their assignments, Gonzalez said. Many have connectivity issues with the internet hot spots issued to them by the district.

“According to my teachers, over half of their students are currently at risk of failing their courses,” Gonzalez said.

Because of the enrollment drop, Gonzalez may have to give up a teacher, she said. Several of her principal colleagues are in the same predicament.

“Many are at risk of losing one or two teachers,” Gonzalez said. “My biggest fear is that this is happening to some of our most vulnerable communities, which need more, not less resources to support students at this time.”

A Los Angeles Unified School District student attends an online class at the Boys and Girls Club of Hollywood on Aug. 26. The facility is open for children whose parents must leave home to work. There is no charge. Snacks and lunch are provided. (Photo: Jae C. Hong, AP)

Missing students are a financial puzzle

States such as Texas count average daily attendance as part of enrollment, which means schools can lose money if attendance drops.

Not all students log in, especially in high-poverty schools.

“That’s a double whammy for us, financially,” Hinojosa said.

But Dallas is lucky, he said. The district has more than $600 million in reserves it can use to plug budget holes temporarily. He hopes the Legislature will adjust the rules, so schools aren’t punished financially in the next budget for enrollment and attendance lapses this year.

The problem is less acute in wealthier suburbs, where schools generally rely more on property taxes for revenue and less on state aid per student, said Bruce Baker, an education professor at Rutgers University.

Without changes to state aid formulas, he said, “districts that stand to lose the most from enrollment declines are those that depend the most on state aid.”

Families switching to new schools in pursuit of in-person instruction have driven up enrollment in some private schools and smaller districts outside metro areas.

In and around Boston, Catholic schools that reopened for face-to-face instruction  gained 4,074 students this year, mostly from public schools that opened remotely, said Thomas W. Carroll, superintendent of schools for the Boston Archdiocese.

“When the news hit that Boston Public Schools was going to start virtually, our phones across 100 schools didn’t stop ringing,” Carroll said.

UPDATE: The Catholic schools of the Boston Archdiocese have gained a record 4,074 students since mid-July, with total enrollment now 30,906. Over the past week, the exodus from public schools offering only remote learning has continued. To enroll, go to: https://t.co/46lBPuIeMOpic.twitter.com/5CNPqYrt6l

The archdiocese’s schools lost about 5,000 students in the spring when families could not afford tuition amid the financial uncertainties of the pandemic, Carroll said. His team anticipated that drop would continue this fall, but the wave of new students means the archdiocese can keep open about two dozen schools that were otherwise on a watch list for potential closure.

Outside New York City, many of the small districts that dot the communities around the north and south fork of Long Island have seen enrollment boosts this year as city families take up full-time residence in their vacation homes. Such moves are less difficult now that parents can work remotely and avoid a long commute to the city.

Teachers, parents and children march in the Brooklyn borough of New York in September to protest the reopening of public schools amid the coronavirus pandemic and the threat of a teachers’ strike. (Photo: Mark Lennihan, AP)

It’s too early to know the official enrollment count this year in New York City Public Schools. The district delayed the start of school twice and won’t welcome back middle  and high school students for some in-person instruction until Oct. 1.

On Long Island, the Mattituck-Cutchogue school district has received 10 to 15 new students from the city’s public schools, Superintendent Jill Gierasch said. That brings her enrollment up to about 1,085 students this year.

Typically, Mattituck-Cutchogue sees a decline in enrollment every year, Gierasch said. That’s in large part because home prices in the area are too expensive for families with young children.

When enrollment is declining, Gierasch said, you can’t always perfectly match expenses to the number of students coming to school.

“When people see a decline in enrollment, they would expect to see our expenses go down, but that’s not how it works,” she said. “The same job needs to be done, you just have three less kids in the classroom.”

Contributing: Lily Altavena of the Arizona Republic, Melissa Taboada of the Austin American-Statesman and Meghan Mangrum of the Nashville Tennessean

As schools debate about returning to online learning, the lack of internet access for many Americans is a big sticking point.

Wed Sep 30 , 2020
NEW YORK, Sept. 29, 2020 /PRNewswire/ — Animoto, the company that makes it easy for anyone to create videos, announced that its latest release will be free for students and educators. Animoto 3, the redesigned and reimagined video creator, supports a wide range of learning activities and styles. The ideal […]