Gov. Lamont during a visit to New Britain High School. Students listen to him both in-person (foreground) and online (on the screen overhead)

Gov. Lamont during a visit to New Britain High School. Students listen to him both in-person (foreground) and online (on the screen overhead)

Lamont says more students logging on for virtual learning. But there’s no data to support it.

One month into the school year, Gov. Ned Lamont says online education during the pandemic is a success, noting that students are showing up for their virtual classes.

“In April, May, a lot of kids never even logged onto their computer. Now we have 97 percent participating,” he told reporters Tuesday in New Britain, where roughly three-quarters of the students are enrolled to learn entirely from home. That differs, he said, from the spring, when “30 percent of people never activated or logged on their computer.”

But the data doesn’t actually show things have improved.

Last spring, the state collected numbers on different levels of absenteeism. Some students logged onto school sporadically, maybe only once or twice a week, but would occasionally go a week without showing up. Others connected just a few times.

Last spring, that datapoint of how many students didn’t log on at all was almost identical: 4 percent. There’s no way to gauge if more students are attending more often than in the spring, because the state isn’t asking about it.

State department officials said they didn’t ask for more details because they didn’t want to burden districts with additional reporting requirements. But such tracking is critical, civil rights advocates say, because a disproportionate share of students attending class entirely online go to school in districts where large shares of students fall behind academically. In the state’s 10 most chronically struggling districts, 58 percent of the students are learning entirely online, compared to 25 percent in all the other districts, state data shows.

“One of the most important measurements to look at is chronic absenteeism, because it’s so related to student engagement, student success and penetration into the juvenile justice system,” said Martha Stone, executive director of the Center for Children’s Advocacy, which helps children from low-income families overcome barriers to be successful in school. “When you already had issues of chronic absenteeism in these major districts, and then you overlay the COVID problems and connectivity problems, it’s really important to get accurate measures not only for chronic absenteeism, but for student achievement, because they will both be affected. It’s really important to measure it consistently and accurately.”

The State Department of Education is now working to set up a better system to track average daily student attendance. It is supposed to be released later this month and will provide a breakdown of students attending in-person vs. online, and by race and ethnicity.

“We’re in the midst of standing up massive new collection and reporting systems that not only require technical development, but involve major policy, explanation, and clarification for educators in all schools and districts across the entire state. Efforts like this normally take years to implement; we’re implementing them in weeks and months,” said Peter Yazbak, spokesman for the education department.

Lamont, who is facing considerable pressure from the state’s teachers’ unions not to force schools to reopen, nonetheless strongly favors students attending school in-person. But he is unwilling to force districts to offer students in-person learning or to require students to attend it.

“Look, not everybody feels comfortable going back to the classroom full time,” said Lamont, pointing out that only 370 of the state’s 530,000 students have tested positive for COVID-19 since school began. “Is [online learning] as good as in-person? No. … Look, for these kids who are disconnected, we’re doing everything we can to get them connected if they can’t come to a classroom in terms of what we can do for [getting them] a Chromebook and regular communication – but there’s always room for improvement.”

In New Haven, the state’s largest school district that has not reopened for general education students, one-in-15 students have not been logging on even once each week. In New London, where just over a third of the students are learning completely online, one-in-5 students didn’t log on a single time during the Sept. 21-25 week. In East Haven, one-in-5 students went completely MIA.

Asked if districts will be given any incentive or nudge to get more students back in school, Lamont said that isn’t the plan.

“Look, I can only do so much by fiat. If New Haven parents and teachers don’t feel confident with their kids going to school, I am not going to order them to go back to school,” he said. “I’d use moral persuasion, not fiat.”

In New Britain, where the governor visited earlier this week, 2.2 percent of students didn’t log on at all, a statistic he celebrated.

The average daily attendance is likely much lower, however.

Teachers interviewed at Tuesday’s event said roughly 80 percent to 90 percent of their online students are showing up daily. However, they pointed out, that aligns with what they were seeing before the pandemic moved students online.

“We had a chronic absenteeism problem before. We still have one,” said Colleen Moffett-Mals. “It might actually be a bit better because for some kids it’s easier to log in at home, and they prefer online.”

“Fifty to 75 percent of them are engaged, and online and doing great. There are some who I think are still in bed, it’s dark in the room, or they don’t turn on their camera, and there are some who don’t get up and get online for classes, so that’s what we are working on. But the majority of the kids are there and they are very engaged,” she said.

According to a survey of nearly 2,000 teachers released this week by the state’s largest teachers’ union, just 39 percent of teachers in the state’s Alliance Districts – the 33 lowest-performing school systems – feel equipped by their districts to engage absent online learners, while 52 percent in other districts do.

It is not clear if the lack of universal access is because the district isn’t able to provide it yet, or because some students haven’t come in to pick up available equipment. State officials aim to have all the laptops and internet connections that districts requested in place by the end of this month. New Britain High School got its delivery of laptops earlier this week, the superintendent told the governor Tuesday.

In Stamford, Kindergarten Teacher Sandra Peterkin said every student who is learning online has been provided a computer and free internet if they weren’t able to connect already.

“Not having a device at home is no longer an excuse. Now, if they are not showing up then there are other reasons why,” she said. “I don’t think students not showing up is worse that it usually is. When you think about it, they chose online, so they should all be showing up.”

State education commissioner Miguel Cardona said his agency is working to get students to sign on more consistently.

“While there’s still a lot of work to do, especially because some things we can’t control, like the delivery of the laptops that we ordered, we’re making so many more gains now in the fall. We have 97 percent connection, and you know what we have to do is continue to work with those students who are disengaged or that come in for some days and not others. And this is something that we’re going to continue to get better at every day,” he said. “We’re really now focusing on families that may have other issues, other traumas, that we need to support also. We think attendance is a symptom of other issues going on and we want to make sure we get to the root of those issues with the families.”

Remote learning has been a disaster for many students, but some kids have thrived

Fri Oct 9 , 2020
This story was produced by The Hechinger Report, a nonprofit, independent news organization focused on inequality and innovation in education. John was having some trouble in class. The seventh-grader had been diagnosed with ADHD and a language disorder that makes processing verbal and nonverbal cues a challenge. Despite extra support he […] 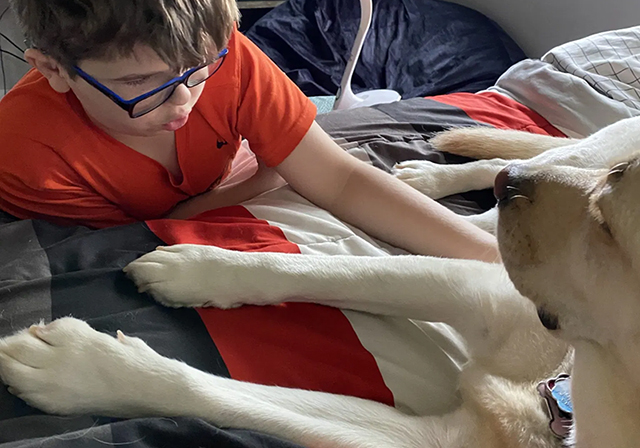